Before you can eat all of those delicious fresh fruits and vegetables you've bought, you'll have to wash them with some kind of disinfectant. 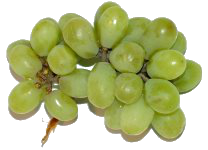 solution (1 tablespoon bleach per gallon of water). Another popular option is to use a "microbicida" (microbe killer) such as Microdyn or BacDyn which is made specifically for cleaning produce and can be purchased at the grocery store. It's active ingredient is colloidal silver (long recognized as a natural anti

bacterial agent) and it leaves no smell or aftertaste.

Let your produce soak for about 10 minutes in a small amount of the disinfectant mixed with water (see instructions on bottle for exact measurements), drain, dry and enjoy.

Any discussion about eating in San Miguel should definitely include a few words about what particular foods are served when. During my first few months here, I wandered the streets, fruitlessly searching for the tamale lady or an open bakery. I finally realized that I wasn't looking for food in all the wrong places, I was looking during all the wrong hours of the day.

While the word breakfast (desayuno) in Spanish means to break the fast, just as it does in English, and while lots of families eat cereal, juice and toast at this time, it's also just as common to eat a tamale, eggs, beans and tortillas or even enchiladas as your first meal of the day.

That's why you'll need to head to the tamale stand first thing in the morning if you want to get there before they run out (as I strongly suggest you do). 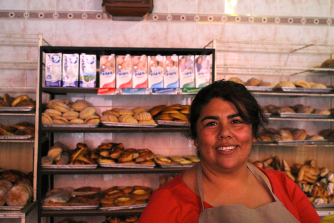 As for lunch, school kids eat lunch at mid-day (taken in their lonchera, or lunchbox), but most everyone else eats comida, the main meal of the day, served around 2 or 3 pm. Families with children often wait until their kids come home from school so that they can eat their comida together.

Dinner (la cena) at home is often a light meal, and traditionally included "sweet bread" (pan dulce). To get some of that sweet bread for yourself, head to a panaderia (bread store) during the hours of 8-11am and 5-9 pm, and you're likely to find it open, although many bakeries are open in the afternoon as well.

And consider yourself warned - going out to dinner with your Mexican friends will feel more like a midnight snack. Dinner frequently isn't scheduled until 9, or even 10 pm. And don't try to get any of those delicious little tacos on the street before 7pm. - it just aint' gonna happen.

Eating on the Street

Is it safe to eat "street" food? Well, how adventurous are you feeling? How strong is your stomach? How susceptible are you to intestinal problems? How hungry are you? In general, cooked food is safer than raw food, although I have

not done any kind of blind tests on this claim.

In any case, street food is the closest thing to Mexican fast food you will find in San Miguel and it's all pretty delicious. What follows is

my experience of the most common foods sold on the street. Keep in mind that generally speaking, none of these vendors speak English, so unless you already speak Spanish, be bold, point a lot, and smile widely.

There's also usually something like a giant soup pot or two, which contain atole, a traditional drink made with chocolate or vanilla flavored corn starch and/or corn flour (masa). Allow me to digress momentarily about the chocolate atole.

mean the same thing), there are also Mexican food cognates, foods which you think you recognize, but really, you don't. Trust me. Chocolate atole is one of these. You will swear it must be hot chocolate until you take a big swig and then you will want to spit it out. Instead, take a small sip, expecting a very thick, hot drink with something like a whiff of chocolate, and eventually you will acquire a taste for it, and perhaps even a hankering. 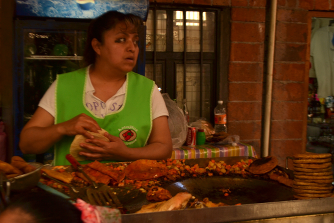 like a giant wok. A gordita is kind of like the Mexican version of a pita bread sandwich, the "bread" being made out of a cornmeal-like masa and the fillings, or guisados, previously cooked combinations of meat and vegetables, often housed in that ubiquitous blue speckled kitchenware.

The cook will fry the dough and then fill it with your choice of guisado.

Another Mexican food cognate is the corn on the cob sold on the street. Don't be expecting sweet, juicy roasted corn - this strain of corn is much starchier and less sweet than other varieties - think tiny baked potato bits on a stick.

It's hard to miss the fruit stand, the seller wielding his giant machete, whacking open juicy watermelons and fragrant coconuts. It looks SO good, doesn't it? Especially on those scorching May days, who can resist a plastic container of mixed fruit?I can.

After getting typhoid three times, I don't even look at that cantaloupe.

How do you get typhoid, you ask? It's gross, but I will tell

you, because you need to know. It comes from human feces, either left over on the hands of that guy at the stand who wiped and then didn't

wash, or from little bits that have detached themselves from their mother poop deposited in an open field somewhere and are now blowing around in that dry air.

So, if you must eat raw food on the street, don't do it in April and May, the hottest, driest season of the year! Wait until the rainy season when those microscopic pieces of poo are no longer wafting through the air and landing on your melon. 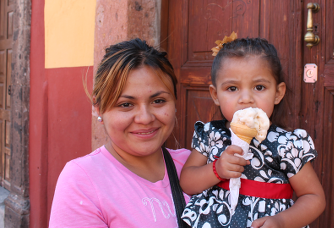 What you can eat on those hot days is ice cream. You will find vendors all over town, throughout the year, "refrigeration" supplied via metal

containers wrapped in towels, as shown in the photo to the right.

Mexican ice cream is less "milky" than traditional North American ice cream, but still delicious in its own right. There is usually a choice of cones and a large variety of flavors. Take advantage of being in Mexico and try some of the fruit flavors - mango, papaya, lime (limón) and strawberry (fresa) are especially delicious. 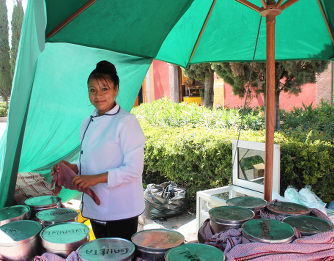 Queso con fresa (cheese and straberries) is something like strawberry cheesecake and another favorite.

Anatomy of a Taco Stand

When 8 o'clock rolls around and you're craving a little something, there is only one place to head – the nearest taco stand! Don't misunderstand – we're not talking crunchy, deep-fried folded shells filled with ground beef and beans sold north of the border. Street tacos are tiny, and serve as both a little snack as well as, en mass, a great meal.

Look for a metal trailer on wheels, a pineapple hanging on one end and several men standing over a sizzling grill wildly flipping tortillas. Our personal favorites are the guy on Insurgentes between the library and Hidalgo, and Tacos Lucas, about halfway up Cinco de Mayo.

Choices typically include al pastor (the Mexican version of the Greek gyro, in which pork is roasted on a vertical rotisserie and flavored with pineapple), bistek (steak, as you might have guessed) and chorizo (a kind of Mexican sausage). You can also order a gringa (not to be confused with a Caucasian female), which is a quesadilla made with a flour tortilla (the white kind...get it?), cheese, and whatever sort of meat you choose. Your tacos will be accompanied by salsa (hot sauce), verduras (vegetables) such as sliced onion, limes and cilantro. The cilantro is for sprinkling on top of your filling and the lime is for squeezing over everything (yum). Prepared as such, just one bite will convince you that you have died and gone to taco heaven. 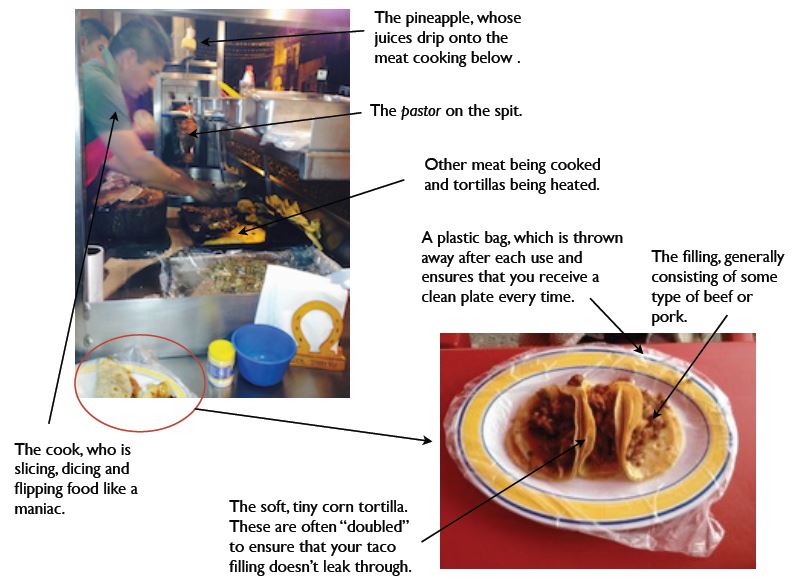 A few final comments for when you decide to go the less adventurous route and eat at a "regular" restaurant. Go ahead, drink the water. Drink lots of it, if you want. You don't even have to ask for bottled water, although you can. But note, when you're done drinking, and eating, you'll need to ask for the bill. Simply say to your waiter "La cuenta, por favor." Here in Mexico, for the waiter to give you the bill before you ask would be like handing a dinner guest his coat while he's still eating his apple pie.

As you're leaving the restaurant, nod to the folks who are still eating and say buen provecho or just provecho. It means "Enjoy your meal." They will respond with a simple gracias (you should do the same when it's said to you). It might seem weird speaking to strangers like that, but to Mexicans, it's simply good manners.