When I moved to San Miguel quite a few years ago, I had no idea how much I would benefit from living here. To be honest it was Montreal winters and high Canadian taxes that initially drove me to consider living in Mexico. But it was also my fond memories of the Latin culture of Spain when I lived there as a student that attracted me to another Spanish-speaking country. We had a friend who used to live in Mexico City and who spoke very highly of San Miguel and that was what really helped us make up our minds.

After growing accustomed to life in this part of Mexico I have to say that it is the unexpected things that seem to become more important as time goes on. The expat population of San Miguel came here first in the 1950s and, as they were primarily artists come to study at the Instituto Allende, it became something of an arts colony. This genetic foundation seems to shape the lifestyle in San Miguel to this day, seventy years later.

Like Santa Fe in New Mexico, Aspen in Colorado and Banff in Alberta, Canada, San Miguel has a creative spark in its core. People move here and discover a creative side to themselves if it is not there already. When I moved here I was escaping from a long career as a classical musician that I had finally become frustrated with. Wanting a change, I set aside my musical activities for half a decade while I pursued my new occupation of being a stock trader. After a while I moved into real estate, encouraged by a local broker and discovered that I had a knack for business and relating to people.

But the atmosphere in San Miguel, which must have some magical qualities, keeps spurring me to other creative activities. I came back to music, in my spare time, and spend some time every day playing classical guitar, my main instrument. But for the last decade I have been composing contemporary classical music in a serious way. To the point that if we were not in this terrible COVID inspired hiatus, I would be having a string quartet premiered in Vancouver this year and a new piano piece performed here in San Miguel. A bit over a year ago I was in Toronto supervising the recording of two pieces in the Glenn Gould Studio at the Canadian Broadcasting Corporation, one for violin and piano and the other for violin and guitar.

There is just something about San Miguel that allows, perhaps even encourages people to extend their creative urges and become painters, photographers, watercolor artists, poets, screenwriters and a host of other things. My latest interest is abstract sketching something that, before I moved here, it would never have occurred to me to even consider trying.

If you should move here, I wonder what creative doors might open for you? 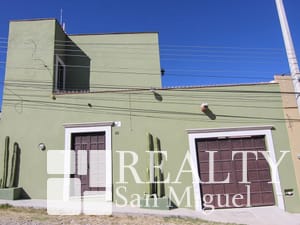