For many years the San Miguel de Allende real estate market has attracted what I would call the bucket list clients.  These are people who had often visited San Miguel many times and had it on their bucket list to either retire or have a second home here. However, in the past year the market has drastically shifted.  Although there are still many buyers who still fit into the bucket list category, the new market has become those escaping some undesirable situation.

Those escaping are coming mainly from the US and Canada, but we are also seeing an increase of clients from Western Europe.  Their reasons vary greatly, but in an attempt to summarize, I’ll just say that something has either already become intolerable to them, or they anticipate that it will become intolerable soon. “I just don’t want to have to deal with this anymore if it is easily escapable by relocating,” a recent client told me.

For some it is that their city has become more violent and they now fear for their safety, while for others it has more to do with strict covid policies, mandates, and their belief that San Miguel will remain more open and free. For the Europeans it seems that they are wanting to escape the impending energy crisis.

Of course current politics contributes to their decision – on both sides of the spectrum.

For many years I’ve mused that the elections in the US always create more real estate sales in San Miguel de Allende.  It didn’t matter who won the election or which political party took control of the congress or senate, many who had supported the losing party ended up moving here. Perhaps the disgust of, “I just don’t want to have to deal with this anymore” has been at play for a long time.

However, in the past year we are seeing both ends of the political spectrum coming at the same time. On one hand, and being very general, there are those who are afraid that Trump will win again or that the Republicans will take back both houses in the November elections, but there are also just as many who find Biden’s and the Democrats policies too much to tolerate.

The bottom line is that the escapist will impact the San Miguel real estate market, which I will explain in more detail below.

As I’ve mentions before, the real estate market is currently defying all previous cycles that spanned 33+ years.  Top to top, the cycles were 10, 12, and 11 years long.  Each of those cycles could have been divide into thirds, with the first third of the cycle seeing prices decrease, the middle third with prices and sales flat, and the last third of the cycle booming again. From the last peak in mid-2018 through mid-2020 we saw sales and prices declining, which was consistent with the previous thee cycles.  Then, as soon as most of the covid quarantines were over, the market begin to pick up again and has not looked back since. 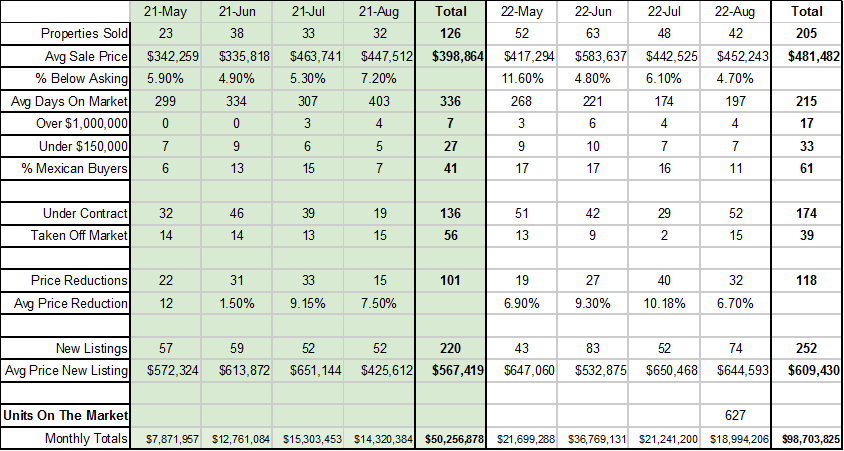 As long as the environment in San Miguel de Allende, and Mexico in general, remains favorable for those who are escaping, our market should continue to see comparable sales – whether prices go down, up, or remain the same.  A safe place seems to be the priority for many buyers.

However, as I mentioned in the last update, there are still many other factor at play which could affect prices.

For example, in previous cycles we saw less sales when the stock markets were down and more sales when the stock markets were up because many buyers, even if planning to eventually live here full time, were cashing in investments to purchase a second home.  But most of those escaping seem to be selling properties elsewhere to purchase a property in San Miguel. This means that even though their investments may be dropping in value, they are basically trading one house for another and not using their investments.  But of course there are still a number of buyers who I’ve mentioned in previous market updates who seem to be moving out of their dollars and into fixed assets.

If the environment in San Miguel remains favorable I expect that prices will remain the same or perhaps slightly increase.  The issue that will hold prices down is that the interest rates have increased in the US and Canada and are or will put a damper on the real estate markets there. This translates to buyers having sold for less and having less money to use for their purchase here. Also, in theory, if more people are “escaping” to San Miguel it will mean less turn-over in inventory since they won’t be leaving any time soon.  If inventory keeps dropping this will bring upward price pressures.

I am following way more indicators than I can even mention here.  I’ll just say that we are living in a crazy world with more uncertainty than I’ve ever personally lived through. Although much of what I keep my eyes on could be bad for the San Miguel real estate market, there are also some things that could give it another boost.  Much depends on what happens in the rest of the world.

The world is more connected than ever before and frankly it feels more fragile to me than ever before.  When I think of the hundreds of major economic and political decisions that are made globally on a daily basis, in this current environment, it isn’t difficult to imagine one of them spinning out of control with big consequences.

We continue to have huge demand for both short term and long term rentals.  In fact, so much demand that at least one of our agents receives between 20-40 rental emails a day and can’t even respond to them all.

If you have a home in San Miguel that is not being fully utilized and are interested in renting it, we have several agents who would be happy to help you.

If you have been sitting on the fence of whether or not to sell your home in San Miguel, we would be happy to help you. In my opinion, there hasn’t been a better time to sell than now. There is a chance that prices will increase if you wait a little longer, however, I think that there is an equal chance that prices will remain the same or drop.  Thus my reasoning for advising to sell now.

Shoot me an email and I am happy to pair you with an agent who I believe will best serve your needs.  We always give a no obligation evaluation before we list your home.

Thanks to Lilia Aguilar, one of our sales and rental agents who helps me track all of the sales data and compile this report. 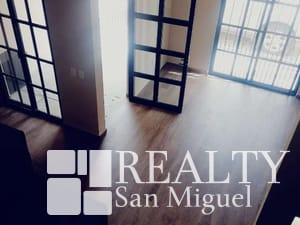 “San Miguel Realty is the best!”