Is San Miguel de Allende Open to Visitors or Shut Down?

As of July 15, 2020 San Miguel de Allende is open again with hotels and restaurants allowed to operate at a limited capacity.  Most stores, galleries and shops are also open and all businesses are required to take several precautionary and sanitation measures.

The Queretaro airport (QRO), Leon’s airport (BJX), both about an hour and fifteen minutes away from San Miguel are open.  Some clients, who had just arrived yesterday, described entering without problems and easily received their tourist visas.  They indicated that they had to walk over a sanitation mat, which is typical of all of the businesses in San Miguel, had their temperature checked, and had to fill out a short health questionnaire regarding any possible symptoms they may have.

Although the land crossing suspension was supposedly extended until the end of July, I continue to read that multiple people say that they crossed the border without a problem.  A few who were stopped or without a resident visa and had to stop, explained that the just told the immigration officials that they were going to their “home” in San Miguel de Allende and even if they didn’t have a resident visa, they were given a tourist visa. 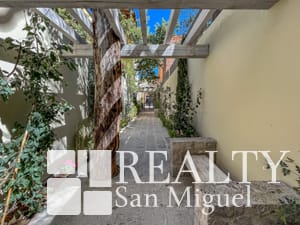 “Philip… you were a fountain of knowledge while we both had hundreds of questions. ”