Buyer Beware – Only 50% of All Homes For Sale Are Reasonable Priced!

Comparable home prices in San Miguel have always been all over the board and a large number of overpriced homes is not unusual (explained below).  However, currently the number of homes that are overpriced is just off the charts.

In April of 2020 we created an algorithm to compare every home on the market against what our extensive database calculated would have been the home’s value at the peak of the market in mid-2018.  Considering that based on 2019 sales, market values had already dropped between 10% and 17% from 2018, the results of our algorithm were shocking.

We found that slightly over 40% of the homes currently for sale were still priced at or above the peak prices of mid-2018.  The percent of “overpriced” homes went to more than 50% when you take into account the price decline of 2019.  Of course “overpriced” is relative, but we’re not talking about just 3% to 5% overpriced.  Graphing the overpriced homes compared to actual sales in 2019 showed a fairly evenly spread ranging between 1% to 56% overpriced.

What it doesn´t mean?

San Miguel always has a lot of overpriced homes.

Since I first started in real estate in 2006, this has always been the dynamic in San Miguel.  In my opinion, this happens for three main reasons.

Because of these three primary factors, and in my opinion, 50% of the homes for sale in San Miguel de Allende are always overpriced.  However, historically I would say the range would only be five to fifteen percent compared to today's 40% to 50%.

In conclusion, find an agent who knows the inventory well and can help you weed out the overpriced homes and focus on the ones that are reasonable if not aggressively priced so that you don’t become one of the buyers who overpays for a home.

Of course, I believe that the agents of Realty San Miguel are the best trained and will give you the best representation possible. 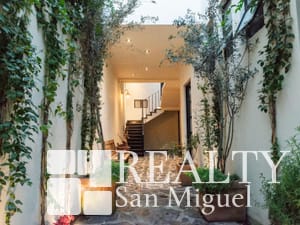