Bouncing Off The Bottom

Since the world financial crisis began in late 2007, San Miguel de Allende has seen residential real estate prices fall anywhere from 35% to 55%, depending on the area of town. As much as I would like to keep my clients informed, I have been reluctant to call the bottom until I saw what I considered substantial evidence. For the past 15 months I knew we were getting close, because I continued to see homes sell for at or below replacement cost. “Replacement cost” is the amount it would take to buy the lot next door and rebuild the same house in the same condition.

When homes are selling at or below replacement cost, this indicates that pricing fundamentals of the industry are being violated. With real estate and home prices, the fundamentals start with the developer. In the simplest terms, a normal profit for a developer ranges somewhere between 10% in the lean years and 35% in the better years. When prices go outside of these norms market forces will move them back into the norm. For example, when earning less than 10%, developers can’t stay in business and inventory goes down, which drives prices up. When developers are making more than 35% everyone become a developer and inventories get over built, which drives prices down. On both ends of the cycle there tends to be an over reaction, (such as homes selling below replacement cost) before prices come back into the norms.

Although many homes in San Miguel have been selling at, or in some cases below replacement costs for months, the additional evidence I was looking for to be able to announce “bottom” finally arrived. For the first time in the past few years we are seeing homes sell at asking price, versus the typical 5% to 15% below asking price. In fact, there are at least four instances, that I know of – all in Centro. This makes sense, given that Centro is the hottest real estate market in San Miguel de Allende. It was the last to see the decline in prices after the crisis began and will be the first to recover as the downturn ends.

What homes selling at asking price means, at least in Centro, and somewhat in the “walking distance to Centro” areas, is that buyers are not seeing an abundance of inventory which would allow them to bargain hard, but rather a limited inventory in which they are willing to pay to get the home they want in the location they want.

In addition, sales volume has consistently increased over the past 18 months and it appears that we are finally seeing a steady flow of American and Canadian baby boomers seeking a retirement home. They are a huge group who will populate San Miguel in the coming years and bring prices back up.

Although most indicators seem to be pointing to better times, I’m still holding my breath a bit and hoping there is not a huge correction in the stock market. If so, then perhaps we could see prices go even lower, since many buyers use the liquidity of their stock portfolio to purchase homes here in a primarily all cash market.

Yes, I’ll go ahead and call bottom (subject to the stock market), although we may still be bouncing off of it for a while more. 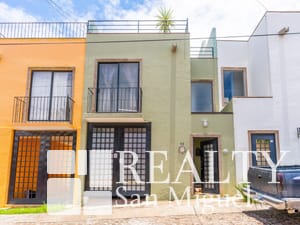