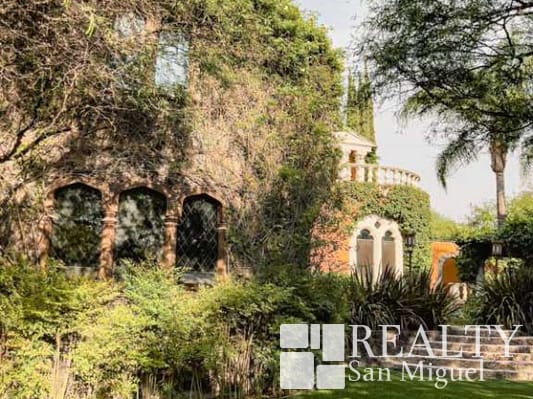 This magnificent property consists of three separate buildings situated in an enclave of beautifully designed mature landscapes and gardens. The owners have incorporated many features in the landscaping and buildings which they observed during their travels in Europe.

All the buildings are equipped with alarm systems and sixteen security cameras patrol the parameter of the property. Electricity is provided by 28 solar panels working in conjunction with a Sunnyboy converter. The house is serviced by a Telmex fiber optic line.

The central part of the main house is on one level and consists of a wood paneled Tudor living room with a fireplace, a large master bedroom with his and her closets and ensuite bathroom, a kitchen, breakfast room, television room, wood paneled library, and two guest bedrooms each ensuite bathroom. A couple of steps up is a hall which leads to a two car garage, laundry room, and wine cellar. Beyond the hall is a large formal dinning room with a soaring 24 foot high boveda ceiling. It is served by its own kitchen. This wing of the house also contains three guest bedrooms, two of which share a bathroom and open to a balcony overlooking the eight person in ground jacuzzi and garden. The first floor bedroom also has a garden view and an ensuite bathroom The main house has a total of six cantera fireplaces, two indoor fountains and seven boveda ceilings.

Behind the main house is a solid stone two story casita built in a medieval gothic style. On the first floor is a living room with a fireplace, dinning area and kitchenette. The second floor houses a large bedroom and an ensuite bathroom. Leaded glass windows provide lovely garden views.

The third building is in the neoclassical style inspired by a Newport mansion which in turn was based on the Petit Trianon palace in Versailles. The 30 foot by 40 foot music room is the largest room on the property. The room features a celestial painted ceiling by Polly Stark, a large fireplace and has seated 90 people for dinner. The carefully designed room also provides excellent acoustics for musical performances. Beyond the music room is a large billiards room with a pool table and a fireplace. Off the billiards room is a space for a wet bar, four toilet stalls and a large fully equipped commercial kitchen. The second floor of the building contains a one-bedroom staff apartment with ensuite bathroom and a very large storage area.

The grounds around the building contain winding paved pathways, vine covered pergolas, nine fountains, a heated jacuzzi pool, several patios and porches and a roof terrace with covered seating in the style of an ancient Roman temple which offers sunset views.

There are other feature too numerous to be mentioned here. This splendid property must be seen to be fully appreciated.

* All real estate listings are believed to be represented accurately. However, these details are intended as a guide and do not form part of a contract. Buyers should satisfy themselves as to any Information contained herein.

“Eric is the best! He went above and beyond to help us find our dream home. We are so happy we found him, & can't wait to move”