Although Bryan continues to represent buyers, since late 2010 he began specializing in listings. Because of his years of experience in the San Miguel market, there are very few agents in town who can give a seller a more accurate appraisal of their property and realistic expectations of what their property will sell for. Thanks to the broad marketing reach of Realty San Miguel and Bryan's practice of aggressively networking with all of the local agents, he has achieved a high success rate in selling his exclusive listings.

Bryan is an experienced professional with training not only in real estate in Mexico, but also in Canada with the University of British Columbia real estate program and the Canadian Securities Course which is the equivalent to the US General Securities Representative Course.

On a personal level, Bryan excels at partnering with his clients, assuring them that he understands and is responsive to their needs, while at the same time keeping in mind the big picture. He also enjoys the challenge of finding appropriate properties for buyers and creating successful marketing strategies for sellers.

Born and raised in Canada, Bryan's first career was in music. He is an accomplished musician and recognized in his field. He has completed several degrees, taught at the university level, and performed music internationally for many years. Locally he has given benefit concerts for several local charities including the SPA. Bryan speaks three languages: English, Spanish and French, and has lived in San Miguel since 1998.

When circumstances dictated that we must sell our house and buy another one, we knew exactly who our real estate agent would be. Bryan Townsend had helped us through the process of buying our first house in San Miguel and did a wonderful job. The second time was no different. He is punctual for all appointments and takes care of every detail before the sale. We never felt like we were a nuisance. He seems to realize that buying and selling ones home can be very stressful. We highly recommend him and Realty San Miguel.
For 9 months Bryan Reginald Townsend was promoting the sale of my home on Pancho Pantera in Clolonia Guadalupe. During this period my spirit had its ups and downs but thanks to Bryan's confident and sure handed lead my worries never lasted. Always promptly answered my questions, helped me in assessing and analyzing ever changing situations, and most of all kept the optimism in my heart. Some of my requests were a little unusual but he was understanding and able to make them happen. 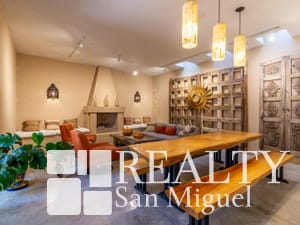 “We have been extremely pleased with Mr.Townsend's work and can recommend him without reservation”